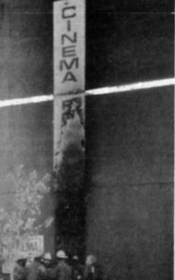 Photo appearing in the Washington Post
The fire began at about 5 pm with an explosion. An employee was using an electric carpet cleaner with flammable liquids on the first floor of the Cinema Follies Theater on October 24, 1977. The flames quickly spread to the walls, drapes and the wooden stairway that led to the theater on the second floor. As the theater filled with smoke, the men inside soon realized they were trapped: it was impossible to escape down the stairs and the only exit from the second floor was padlocked.

One of the four survivors, an ex-Marine, described the scene:
​
I started clawing at the door and then went back up to the front but the heat was just too great ... people went back and forth from the front to the rear near the screen trying to get out. There was no screaming (or) yelling while I was awake ... I remembered that smoke is less heavy on the floor and I     laid down as close as I could to the rear door because I had trouble breathing. The next thing I remember is that I woke up in the emergency room. (Washington Post, Oct 26,1977, p C1).

​It took three days to identify the eight victims who had died at the scene; a ninth victim died two weeks later. Only one, a 28-year old man, was carrying an ID card. Most of the men were married with children, one of the survivors was engaged to be married. The dead included a congressional aide, a pastor, an Army major, a hair dresser and an economist with the World Bank. The names of the few survivors were not released; the hospitals responsible for treatment respected their privacy. A few years later, Congressman Jon Hinson (R, Mississippi) acknowledged during his successful reelection campaign that he was one of those survivors. 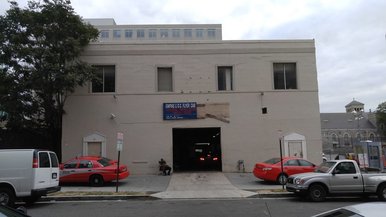 This tragedy is important to GAMMA because it was the event that led Martin S. to found the group to be a safe place for gay or bisexual men to meet, share their stories, and support each other.
- E. Kearsley